When it comes to devices, kids’ holiday wish lists are simple this year. The most-wanted gifts are predominantly from one company—Apple.  According to a recent Nielsen study, Apple’s popularity leading up to the holiday season continues a trend seen over the last couple of years, with American kids aged 6-12 generally more interested in the latest iOS offerings than other consumer electronics and gaming devices.

Approximately half the children surveyed expressed interest in the full-sized iPad (up from 44% last year), and 36 percent in the new iPad Mini. The iPod Touch and iPhone are also coveted devices among these young consumers (36% and 33%, respectively).  Kids are also likely to ask for dedicated gaming hardware this holiday, with 39 percent excited to own Nintendo’s just-released console offering, Wii U, and 29 percent indicating they want a device from that company’s portable DS family.  Microsoft’s Xbox 360 and Sony’s PlayStation 3 also proved appealing, with approximately one-quarter of kids 6-12 saying they want these high definition consoles. 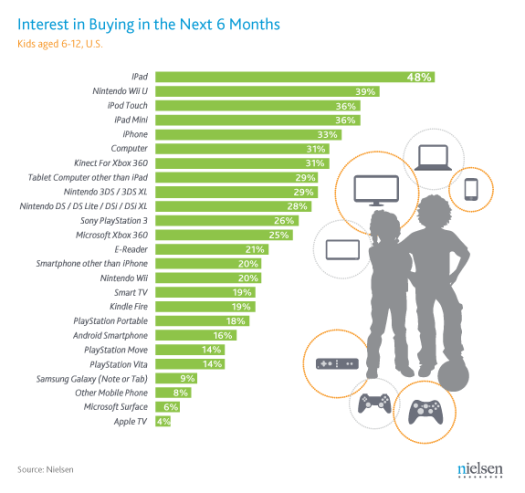 Among consumers aged 13 and older, tablets and full-sized computers were the top electronics choices, with roughly one in five indicating they want to acquire the iPad (vs. 24% last year), any other tablet, or a computer.  Reinforcing the notion that the tablet market is one to watch, non-Apple devices—lead by Amazon’s Kindle Fire and Samsung Galaxy offerings—proved nearly as desirable as the iPad among teens and adults, while e-readers showed a slight decline in interest from 2011.  Consumers 13 years and older were also interested in purchasing the Wii U, the iPhone and Internet-enabled TVs. 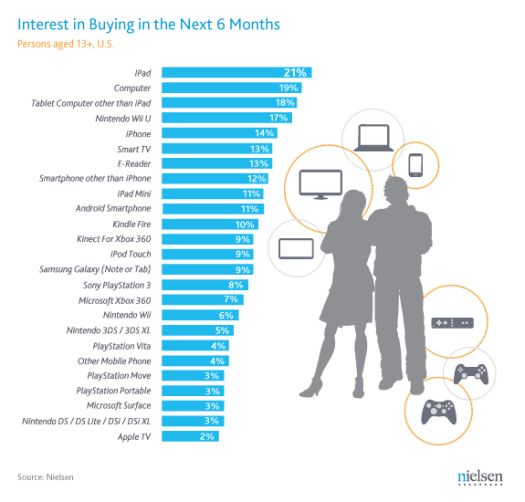 With discretionary dollars and heavy competition across gift categories, these study results suggest that consumer electronics and gaming devices should be an exciting sector to watch this holiday shopping season.