Social media is more than a digital water cooler for TV and movies. The global conversation that takes place around events and the experiences people share based on what they watch teaches us about consumer preferences. More importantly, their activity influences behavior. Behavior counts for everything. Studying it is just the beginning of course. In order to understand and eventually steer behavior, we must translate activity into insights and in turn, translate insights into actionable strategies and programs.

Social networking and listening to music top the activities for Generation-C and each is greater than the time spent watching full-length movies or television shows on a weekly basis.

The report found that 79% of connected television viewers visit Facebook while watching TV.

Pollster Jon Penn notes, “Social media is the connective tissue that enables consumers to multitask during their entertainment experiences by connecting with others and sharing their opinions.” 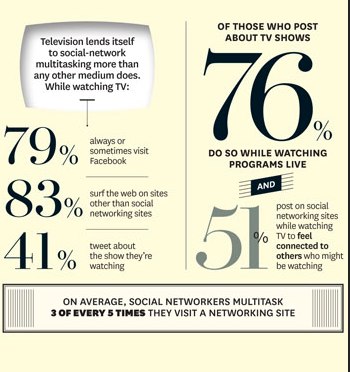 Additionally, 83% surf the web while viewing TV and 41% tweet about the show they’re watching.

When we look at the psychology of engagement, this next stat becomes a bit more revealing. Of those who post about TV shows, 76% do so live and 51% do so to feel connected to others who might also be watching.

Social networking is in its own right a reality show made for the web. It is its own form of entertainment. And, as the study found, an overwhelming majority of people agree. When we look at the types of programs viewers are most likely to post about while watching TV, Comedy, Reality TV, Sports and News take the top four spots.

Social Media on the Silver Screen

Digital Influence is often misunderstood, but it is potent. Influence is causing effect or changing behavior. Here, we can see that those who Tweet about movies actually influence the behavior of those who follow them.

One out of three connected consumers saw a movie in a theater because of something they read on a social network.

The report found that horror and other younger-skewing film genres benefit most from social networking. For example, more than 6% of respondents saw Paranormal Activity 3 because of social networking activity. One can assume based on psychological studies, that this form of social commerce is driven by either #FOMO (fear of missing out) or social proof.

Prior to watching any movie in theaters nowadays, viewers must sit through a short spot that reminds them not to use their phones during the theater. Aside from the ringing adding unnecessary distractions to other theatergoers, the bright white screen is also disruptive as it tends to light up an otherwise dark room.

However, social networking is not limited to at-home movie watching. 55% of moviegoers have texted during a movie. Film moguls and theater owners should take note: The poll also found that an overwhelming majority of 18-to-34-year-olds believe using social networks such as Facebook and Twitter while watching a movie in a theater would actually add to their experience. Nearly half would be interested in going to theaters that allowed texting and web surfing.

The same can’t be said for all consumers though as 75% of respondents said that using a mobile phone would take away from the experience.

Gen-C is often falsely diagnosed with a thin attention span. Yet in reality, Gen-C focuses on all that’s important to them many times at the same time. They’re just wired differently and rather than challenge it or try to debunk its value, our energy should instead focus on understanding how multitasking adds to the experience.

When asked what other activities are performed while social networking, watching programs on TV was by far the most popular at 66% followed by watching movies on TV at 50%. Interestingly, 11% stated that they watch a movie in a theater while networking.

So, what are viewers saying while multitasking between networking and watching TV. It’s a bit of give and take as 67% will listen to or read what others have to say and 33% will most likely express their own opinions or thoughts.

How can social media drive tune-in? That’s often one of the top questions on the mind of TV marketers. As of now, serendipity certainly plays a role in contributing to tune-in. Three out of 10 people watched a TV show because of something they read or saw on a social network.

In the age of social media, viewers have become participants in real-time experiences. And many, are also becoming critics simply what they say and share online. Social network activity certainly influences behavior, but to what extent requires greater study. 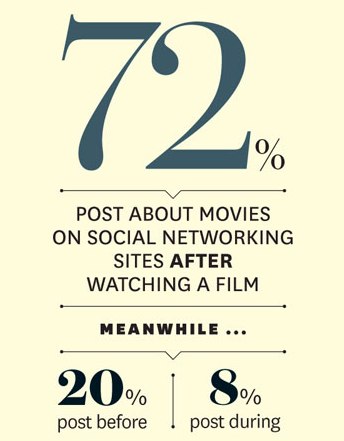 The study found that 72% of respondents post about movies on social networks after watching a film. We can assume that those expressions are rooted in opinion and we can also hypothesis that these shared opinions in some way affect the impression of those who see them. At the same time, 20% post before and 8% post during a viewing.

News no longer breaks, it Tweets. Those who run social activity streams all day will tell you that they learn about news on Twitter first which then drives them to a online or broadcast news source to learn more. But, 31% and 28% of respondents reported that their main source for breaking news is cable news stations news web sites respectively.

I wonder about that data point however as it’s not clear if it is the primary source or the main source. The fact that the study found that social networks make up 19% of their breaking news source provides some clarity, but I still question the source of the flashpoint.

Social Media is Music to My Ears

For those who saw or read about my interview with Billy Corgan of The Smashing Pumpkins at SXSW, certainly heard how he believes fans must step up their support for the artists that they love. And, sharing what you’re listening to is certainly one way to contribute, whether it’s through frictionless sharing apps such as Spotify or stated support by Tweeting, Facebooking or blogging support.

Based on the work of Robert Cialdini, I analyzed six universal heuristics and the role they play in consumer decision making in social commerce. Referred to as “thinslicing,” consumers tend to ignore most information available and instead ‘slice off’ a few relevant information or behavioral cues that are often social to make intuitive decisions.

The THR study surfaced that more than half of respondents (56%) believe that social networks play an important role in making entertainment-related decisions. Across every genre of entertainment, respondents felt that positive posts held greater influence over their decisions than those that are negative.

Specifically, 82% are influenced in the music they listen to; 76% in the TV shows they watch; 75% in the movies they choose to see; and 74% in the video games they play.

I often refer to Twitter, Facebook and activity stream apps as new attention dashboards. THR asked respondents which networks they used and how. The answers help in how we better understand what’s of interest to consumers. 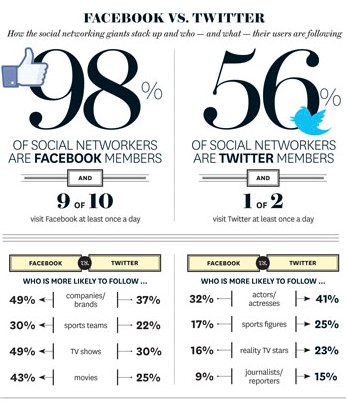 When asked about who and what they follow, participants shared the following…

I find it interesting that consumers connect more with brands, movies, or shows on Facebook whereas Twitter is the preferred choice for connecting with people. Marketers should take note in how people form fandoms and communities, where and how.

The State of Movie Marketing

Considering the behavior of Gen-C as well as all other consumers, marketers can’t rule out any form of promotion or engagement without understanding the balance and how each contribute to consumerism.

The study found that even through social networking is playing a significant role in movie watching and shared experiences, traditional marketing is still king in how consumers make moviegoing decisions. Trailers and previews are the biggest influence for movie choices at 40%, which can include a variety of sources for where that trailer is viewed (theater, TV, website, Youtube, etc.) TV ads still play a large role in decision making at 20%. Real world word of mouth is also a important source of the selection process at 18%. Only 9% of respondents said that comments or reviews on social networks influenced decisions.

You are Now the Architect of a Multi-Screen Experience

Processing this data is one thing. Interpreting its impact on your strategy for programming, marketing, and engagement is up to you. What’s clear is that what we think about social media, entertainment, and influence and how consumers are behaving can only teach us about how to be more engaging, entertaining, and how to create and steer experiences that matter to consumers and producers. So what’s your second and third screen experience? Have you defined it? If not, this is the time to develop an engaging multi-screen experience because it’s already happening with or without your design.