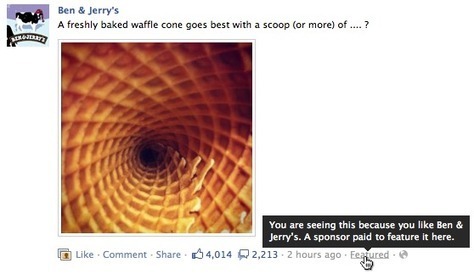 Facebook is now showing Sponsored Stories in users’ News Feeds. These paid units include a subtle indication that the post is “Featured.” However, to respect the user experience, the social network is putting more controls on the the type of messages advertisers can display here than it did when it previously included ads in News Feed in 2007. It is important to note that no story that would not have been eligible to show up in users’ feeds organically will become a Sponsored Story. Marketers can only pay for page posts to be featured in a user’s feed if the user has already liked the page. Pages can seek new fans through other Sponsored Story types that will promote friend activity, for instance, a friend liking a page or liking a page’s post, but the advertiser does not have the option to add its own additional messaging. These stories will also be marked “featured.” Based on the design of the unit and previous examples of social networks putting promoted content in the stream, the change is unlikely to affect Facebook usage. Still, Facebook is slowly introducing these paid stories to the feed to avoid user backlash. For now, users will at most see one paid item in the News Feed per day and these stories will not display on mobile devices. Note that only users who already like Ben & Jerry’s page will see Sponsored Stories like the one shown in the image. Facebook has updated its Help Center with information about the new featured stories. Facebook lets users know they can click “hide” to remove individual stories, limit the volume of stories from specific friends by subscribing to “only important posts” or unfriend the person or unlike the page that generated the story.   [Thanks to insidefacebook]