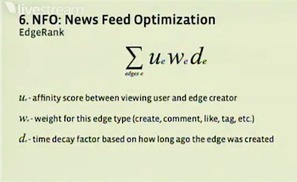 Graph Rank and EdgeRank are what the social network uses to organize the massive amount of activity generated by people, pages and apps and to decide what stories to show whom. Graph Rank applies to Open Graph applications, not page posts or friend’s status updates. Those are affected by EdgeRank, which determines what shows up in your News Feed. Neither of these is a global score. Every bit of activity on the site has a different rank for different users. And because time and affinity plays a role, the rank of each object is not constant.   EdgeRank is the algorithm that determines what items populate your News Feed. With all the friends people have and pages they like, most users would be overwhelmed to see all of the activity generated by these connections. Facebook, therefore, assigns a value to every possible story that could end up in the feed. This value is based on affinity, weight and time. Affinity is the relationship between the user and the page or friend that created an item. Weight is affected by the type of story, for instance, whether it is a photo upload or a comment on another person’s status. Facebook tends to value rich media content and often when it introduces something new like Questions, it temporarily weights activity from that feature higher. The third factor affecting EdgeRank is how recently an action was taken.   Graph Rank is a new algorithm Facebook is using to determine how Open Graph application activity will be distributed through News Feed, Ticker and Timeline. Graph Rank was introduced at F8 with the announcement of a new type of app that can continuously publish user activity to Ticker and Timeline. Because Facebook expects a proliferation of sharing through these Open Graph apps, it developed a system to manage the amount and type of activity that each user will see. Graph Rank seeks to show users highly relevant application stories based on the other connections they’ve made on Facebook. So if a user plays Words With Friends, they are more likely to see a friend’s story about another word game than a story about an arcade shooter.
Via www.insidefacebook.com